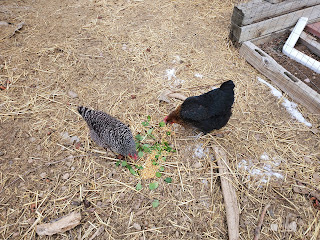 WARNING: this is graphic.

The 2022 chicken season was not meant to be. It really all started in 2020 when I had my first Chicken Tragedy. After losing all my chickens to a predator just before summer got going, I was ready to start over. I had the time on my hand since it was still the early stages of COVID where I was home a majority of the days.

But even getting to the egg-laying chicken stage that year was difficult. I went through 8 chicks over the course of four months and only ended up with two that made it to adulthood. Some died of natural causes while chicks. Some found escape routes from the coop while they were small and my dog got them.

The two that did make it were a joy. One was a Plymouth Rock breed and the other was a surprise Wyandotte (they both were supposed to be Plymouth Rocks). The Wyandotte had a beautiful feather pattern with an orange head and a black body but the feathers had a blueish green shimmer to them in the light. My nieces named that one "Eclipse" because the orange neck feathering that looked like a solar eclipse. Very appropriate name.

They had a wonderful 2021, laying eggs all year long. They had a great winter as well. I didn't even need to turn on the heater for them. They were as happy as could be enjoying their morning meal of soaked scratch grains and spinach (plus other kitchen scraps). Then in early spring, they really started laying eggs regularly. I had so many eggs on hand, I had just started giving some away which I enjoy doing. There is nothing more satisfying as a farmer/producer than creating a surplus to share with others.

But one day in the late spring, I came home in the evening and my wife was in the backyard with a flashlight. I thought one might have escaped and she was looking for it. Instead, she said they were both in the chicken run with their heads chopped off and she was looking for clues as to what had happened. Sure enough I went to the coop and both of their bodies were there lifeless, and both had missing heads.

It was the strangest thing. I'm not sure what predator might have killed them by biting off their heads and leaving their bodies. We never did figure it out but assumed in was a fox or cat. Whatever it was, it was quick because there was no sign of struggle, no feathers spewed about like there would have been if it was a drawn out chase.

Now that COVID is subsiding and my travel schedule is picking back up, I've decided to retire from chicken raising for a bit. I'm glad I did it for the last 4 years. I will always be ready to get back into it, but I could use the break for a bit. I will miss the incredible, fresh eggs but will now explore ways to use fewer eggs as part of my diet. I'll be sure to share my recipe successes on this blog along with keeping the readers up to date on when I decide to return to chicken raising.