Lost All My Chickens 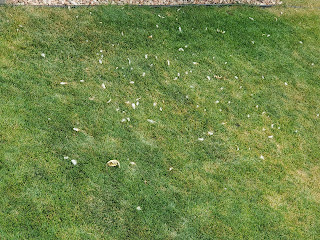 WARNING: this is graphic.
It was a sad day yesterday. Something got into my chicken run area, then into the coop, and attacked and killed all three of my chickens. I had a Buff Orpington that had just turned two years old and I had two white Plymouth Rocks that had just turned 12 weeks.
I woke up, went downstairs, and prepared their daily treats of seeds, grains, and leftover veggie cuttings. I went outside and went to the coop and no chickens came running. I saw a few feathers but the Plymouth Rocks had been shedding so didn't think anything of it.
I peaked into the coop and saw a lot more feathers including some orange ones from the Buff Orpington. Then I looked across the yard and saw feathers spread everywhere with the older one splayed on the grass. It was pretty bad. The predator must have been a coyote or fox to carry the chicken that far. The center was eaten and all that was left was the head, neck, wings, spine, and feet all intact. And the guts were there including a couple round balls that looked like cherry tomatoes. I realized those were egg yolks about to turn into eggs.
Then I started the search for the other two chickens. No sign of the them in the coop or in the run. I peaked over the neighbors fence and sure enough there was one. Interestingly it was still in tact. It must have just had its neck snapped or some other kill shot.
I looked all around for the third chicken but have not yet found it. It makes me think that there was a pack because when this happened in the past, the predator only took one chicken and left the other one. This time they took all three and left two of them in totally opposite sides of the yard and carried the third one away.
I cleaned up the mess and tried to rake up the feathers but couldn't get all of them. Now I'll have a reminder of them from the feather remnants spread across my lawn.
It's always such a bummer when this happens. My dog had gotten four of my chickens in the past, but I only had a coyote or fox attack once in the middle of the winter. I thought I might be okay not having to close up the coop at night in the summer, but boy was I wrong. Now I will need to close the coop up every night.
Just thought it'd be helpful to share the realities of chicken ownership. I had such great plans for all the eggs I was about to get, but nature doesn't care about your plans and will always change things up. I might take a break from chickens for the rest of the year and just start fresh with new chicks next spring.