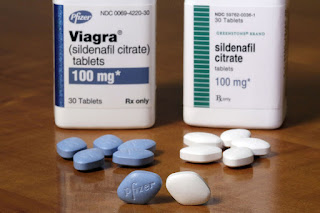 I mentioned in a prior post how I discovered and tried GoodRx to save money on my dog's prescription. GoodRx is a new online mobile way for me to shop the pharmacies in my area to see who would have the best price.

Well, I tried it on my dog's second prescription, sildenafil (aka Viagara). Yes, my dog has a prescription to Viagara. My dog has a heart condition and this medicine helps with blood flow thankfully without the same side effect as humans.

My experience with buying this medication has been even more extreme than the first one. When we first tried to fill it at Walgreens, they wanted $300 for 30 pills. That's $10 a pill! They viewed us as an uninsured customer and that was their price. If we instead got it filled through a vet, it was only $60. Proves yet again how much Walgreens is trying to gouge customers.

So for the last year we've been filling the prescription through the vet since $60 seemed to be the best we could do until I tried GoodRx. Without having to create a log-in or anything, I pulled up www.goodrx.com and punched in sildenafil with my zip code. Sure enough it showed that King Soopers and Costco would be way cheaper than my vet at only $15 for 30 days.

Knowing that Costco worked the last time by even beating the GoodRx price, I figured I would try that one again. When I went to pick it up, I didn't mention GoodRx and the pharmacists quoted the price at $45.

I then said that GoodRx showed it would only be $15 and she asked for me to pull it up. I showed her my phone with the Rx code. She punched it into their system and sure enough it dropped the price from $45 to $15! This time GoodRx did beat Costco!

This proves two things. First, GoodRx is awesome! Being able to comparison shop right from a mobile device is key to saving money. Second, it is insane how screwed up our medical system is. To think Walgreens wanted $300 for something that I can now get for $15 is ridiculous and shameful on the part of the entire drug supply chain.

Whether it is your pet's prescriptions or your own, I recommend you start using GoodRx now. You will likely save a lot of money and can do your part in helping lower the medical costs in our system.