Why Depression Scares Are Overblown 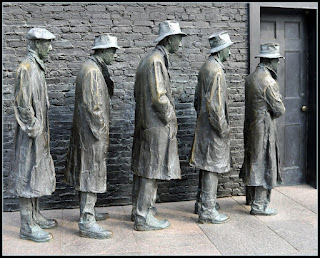 In my last blog post, I outlined why the current thinking that low interest rates help the economy is perhaps not right. In conjunction, the thinking that higher interest rates will create a deflationary death spiral that could turn into another Great Depression is too flawed.

Certainly the transition from lower interest rates to higher rates will not be easy or smooth. Stock prices, real estate values, and other financial assets will be impacted, and at current valuations, the impact could be material.

But with COVID, the Federal Reserve and Congress already know they will need to print money and provide fiscal stimulus. They'll need to do this whether interest rates remain low or are higher. Interest rates have no bearing on stimulus (other than they'll have to pay more interest on the money they borrow which again is a good thing because that means more income for Americans who hold those treasury bonds).

What matters is how this stimulus money gets spent. Right now they'd rather use monetary stimulus to prop up overvalued markets and use fiscal stimulus on bailouts for businesses and corporations in exchange for a promise to keep their employees employed. Markets don't need propping up. Capitalism is the perfect mechanism for situations like this. More on this below.

As for fiscal stimulus, giving it to companies in the hopes they keep people employed is misdirected. Why not just let the companies furlough the associates and provide that money directly to the unemployed? Guess what, with these talented people unemployed but still getting paid as if they were working, I have no doubt that there will be amazing innovations and companies that get started as a result. This would be a huge boom for small business creation and entrepreneurship. Never before in history will so many people be in a financial position with the time needed to do that.

Then for those that don't want to start their own thing or aren't successful in that pursuit, Congress can start a New New Deal to make sure they get a productive job. There are so many things that need to get done in this country and having that man/woman power would be amazing.

Then guess what happens next? As we get the medical solution to COVID and businesses/corporations start to come back, they will rehire the people they furloughed. But the beauty is some of those people may have already found something better (or will have retired thanks to higher interest rates). So now those businesses need to recruit to fill those jobs and will likely end up paying applicants more to motivate them to leave their current gig. This will create the wage growth that the Federal Reserve is trying to create with low interest rates but isn't successful at doing.

Lastly, there will be businesses and corporations that won't survive COVID, but it's not the Federal Reserve or Congress's job to ensure they do. It's called risk for a reason. Had many public companies not levered up their balance sheets over the last few years to do stock buybacks, they would have been in a much stronger financial position to weather this pandemic. The American people should not have to use their tax dollars to bail out corporations and businesses, plain and simple.

Take the airlines as an example. Whether they get bailed out or not, the planes will still be there, the airports will still be there, and all the other assets and infrastructure will still be there. Yes, some of the major airlines may need to file for bankruptcy or issue shares. This will hurt equity and bondholders, but opportunity will be created for others to step in and buy the company and its assets at a discount and be in a stronger financial position after COVID. That is the beauty of capitalism. Things that are worth saving will find the capital to be saved without the government's help.

We have nothing to fear if we let the market do its thing and provide a safety net for people, not companies. A depression is caused when we don't provide a safety net for people. That's what happened in 1929 and 1930. Banks failed and people lost their savings. Had the government had FDIC insurance like it does now, that would have certainly helped lessen the impact.

We may need to invent a similar backstop for people's 401Ks, IRAs, and home values this time around (up to certain reasonable thresholds). But this will be a fraction of what is needed to bailout corporations and the wealthy, and the beauty is it goes directly to hard working Americans, not to the wealthy. The wealthy will actually take losses, which is needed for their greed and risk taking over the last few years.

You see, we will not get a depression spiral, and instead we could create amazing opportunities for the middle class and low income households that would have never been possible without COVID. But it takes both monetary and fiscal leadership which is something very much lacking in today's leaders.

Either our current leaders are naïve or they are simply covering up the fact that they are bailing out the wealthy and corporations just like they did in 2008. It's time to think and act differently.