How To Set An Old School Mouse Trap 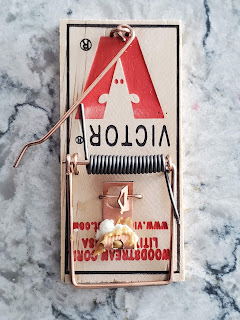 With my chicken coop, I had signs that I had a mouse infestation because there were mouse droppings present when I would clean it out. I had ignored it for a bit hoping the chickens would just eat the mice but I must have vegetarian chickens. So I decided to buckle down and buy some traps.

I prefer the simple, cheap, old school traps. I've tried a few other contraptions but nothing beats the cost and effectiveness of the old school method. Given the amount of time that had elapsed, I figured I might have a family so bought eight traps figuring that would be plenty. I set them using the method below and as I'd catch one, I'd repeat the process.

Well, I set the first one and caught one no problem. Then a second the next day, and again no problem. Then a third, then fourth, then I kept catching them. Before too long, I blew through all eight traps! Back to Home Depot I went. I bought another eight just to be sure.

Then caught number 9, 10, 11, 12. Sheesh, still no end to this and time to open another package of traps. Then caught #13 for a baker's dozen and it appears to have finally stopped! Trap #14 has been sitting outside for a week now without it triggering.

It was insane! I had no idea I had 13 mice living around the chicken coop. What was amazing was how effective my method was. Out of 13 traps I set, I only had one false snap that didn't catch a mouse. All the other times I set one, I caught a mouse. Plus there was one trap that caught two mice! Unbelievable! Sorry for anyone who is queasy but I had to post the picture below as proof.

So when you find yourself with mouse problems, buy some old school traps and follow these steps:

Hopefully these steps work for you as well as they did for me. And let's hope you don't have anywhere close to the baker's dozen like I had. 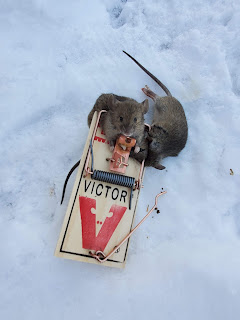