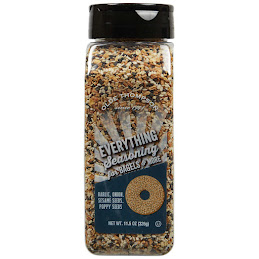 One of my favorite all purpose spices is Everything Bagel Seasoning. No surprise that it's also my favorite bagel flavor as well. But the seasoning works on so many other things. It turns a simple piece of toast into an everything bagel flavor. It goes great on avocados or eggs. It can be used to crust some ahi fish before searing it. I've even used it in stir fries because those sesame seeds with onion and garlic go great with Asian food flavors.

As much as I like it, I am also very particular about the seasoning mix. You see, someone had the not-so-bright idea of adding too much salt to the mix and using thick salt crystals. Most of the time, I get hit with too much salt whether it be on a bagel shop bagel or in one of the store-bought seasoning mixes. The salt crystals belong on a pretzel, not a bagel.

The first time I saw Everything Bagel Seasoning at the store, it was at Trader Joe's. Theirs has a clever name, Everything But The Bagel Sesame Seed Blend. My mind was blown when I saw it and I immediately purchased some. But then when I used it, I realized they also used too much salt (80mg of sodium per 1/4 tsp serving) and the salt they used was the large crystal version. It was just too overwhelming to the point that I didn't enjoy using it.

So I started my search for a lower sodium Everything Bagel Seasoning. It didn't take me long. I saw a giant tub at Costco and this time checked the ingredient label before putting it in my cart. It only had 65mg of sodium per 1/4 tsp serving and I could tell the salt they used was more like a flaky sea salt than the larger crystals. I bought the tub of seasoning and used it at home. Sure enough it was perfect, just the right amount of salt.

I've never tried to make it at home. It seems simple to make, but the minced dried onion and garlic can be difficult to find. And the poppy seeds and sesame seeds can be expensive. I've put a recipe below if you want to try (with what I think is the right amount of salt). Just blend the ingredients in a bowl or spice jar. But so long as Costco continues to carry their perfectly salted version, I'll just keep buying theirs.