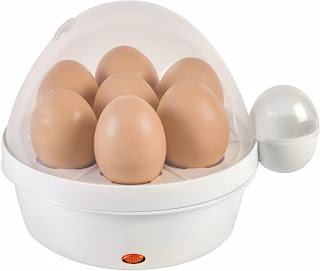 I'm not one for single use kitchen gadgets, especially cheap informercial ones. For some reason though, my wife got excited about the Egg Genie which hard boils eggs using steaming. She found it in a store for cheap and bought it. These retail for $19 on Amazon but I think she found it for $10 at Target or Bed Bath and Beyond.

Turns out it's pretty descent. First, it is small and fits right in our appliance cupboard without compromising other useful appliances. Second, it actually does make pretty darn good hard boiled eggs. It is because it cooks them in steam which is far superior to boiling them in water. Steam allows the inside to cook perfectly without sticking to the shell making them way easier to peel.

The gadget itself is pretty simple. It has a hot plate where you put a certain amount of water depending on how many eggs you want to cook. Then it has a plastic egg holder thing for the eggs to sit in. Then a dome top to capture the steam.

You simply plug it in. The water heats up creating steam. The water slowly evaporates, and when the hot plate becomes dry, the gadget starts buzzing letting you know it's dry and done. You unplug the device and leave the eggs in with the dome on to cool until you can handle them. Then refrigerate as is to peel later or put in a cold water bath to peel right away.

Remember 1/4 cup equals 4 tbsp or 12 tsp. Also, note the Egg Genie has a pin on the egg holder to poke a hole through the egg shell. This is to ensure the shells don't crack while cooking. I haven't needed to use it. First, my chicken's egg shells are pretty thick so they aren't prone to crack. Second, when I have poked a hole in the shell, the white tends to squirt out of it. So I just skip that feature.