What Makes In-N-Out So Great 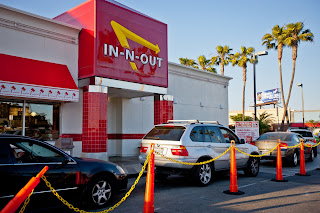 I grew up in California so In-N-Out was a big part of my childhood. At first, they weren't in my area so it was always really special to go on a road trip as a family and be able to stop at one. Then for college and the first few years of my career, I was always around one and it become a staple part of my meal rotation. I'd have it at least 2-3 times a month.

Then I moved to the Denver area and have missed it dearly. I would only have it on my travels back to California or to a state like Texas where they had expanded to.

Well now, In-N-Out has expanded to Colorado! The first one opened in Aurora and Colorado Springs on Thanksgiving weekend. I haven't been because I heard the lines are 12 hours long right now! That means you'd have to eat a meal before getting in line, then another meal while waiting in line, all to finally have another meal. Not worth it in my opinion. I have better uses of my time.

However, there is also a lot of hype around In-N-Out. Word about their burgers has spread across the country as the best burger in the nation, which is a pretty tall claim. So people would travel to California or their other locations and try it and be underwhelmed. They'd realize the burger was relatively modest in size and a decent burger but nothing really special.

You see, these In-N-Out newbies missed the point. In-N-Out is not the best burger you've ever had, but it is the best $3 dollar burger you've ever had. That is the magic of In-N-Out, it is a damn good burger for how cheap it is. That is why my family loved it so much and why I continue to love. There are very few places where you can feed a family of 7 (my two parents plus my four siblings and me) for under $50. In-N-Out was one of those places.

The other thing that In-N-Out newbies likely don't know about is the secret menu. There are some secret ingredients and ways to have your burgers, fries, and shakes made that aren't on the menu. You have to know about it ahead of time.

First there are three secret ingredients - grilled onions, pickles, and hot peppers. A typical burger comes with a full disc of raw onion. It is way too overwhelmingly onion-y for my liking (and probably many others). You can get it without the onion but the burger then becomes too simple. Ordering it with light onions is a better option where they only put 2-3 rings of onions, but the best way to go is with grilled onions. It makes the In-N-Out burger what it is, and if you don't know about it, you are really missing something.

You can also customize your burger even further by adding pickles or hot peppers. Note the peppers are whole mini peppers and are often just served on the side. I like to dice them up and add them to my ketchup for the fries.

Now that you know about the secret ingredients, you can then take your burger order a step further with something called Animal Style. What they do is they add a bit of mustard right onto the hamburger patty while it cooks giving it some extra flavor. Then they add grilled onions, pickles, and extra thousand island sauce. It is a fantastic burger this way. My mouth is watering just writing about it.

The burgers can also be ordered in a couple different ways. First, you can either have it with the bun or have it wrapped in lettuce without a bun. That's called protein style. Second, you can order any combo of patties and cheese you want. The standard is double double which means 2 patties and 2 slices of cheese. But you can go 3x3, 4x4, or even change up the cheese to patty ratio and go 2 patties and one slice of cheese, or 3 patties and no cheese (this is what I order because of my dairy allergy).

Not sure if this is an urban myth, but apparently some fraternity wanted to see if In-N-Out would make a 100x100 burger and sure enough they did! So have at ordering your burger any way you want using different combinations. It's perfectly okay to order a "double double animal style and protein style" (say it just like that).

For their fries, as they come they are actually kind of boring and tasteless. They use fresh potatoes and you can even watch the potato person use the cool slicer to cut whole potatoes into fries with one pull of the machine arm. But that's really it for the fries. It's fresh potatoes fried in clean, flavorless vegetable oil with some salt. They don't use any technique to improve the texture or flavor. The texture can be kind of like soft cardboard and the flavor rather muted. As they are, they really are just a vehicle to enjoy ketchup or their thousand island sauce.

One trick though is to ask for the fries extra crispy. They'll leave them in the fryer a bit longer which helps both the texture and flavor. The second thing to do is order them animal style as well. What they do is they top them with melted American cheese, grilled onions, and thousand island dressing. What a combo! Be sure to get messy though or eat them with a fork.

The last thing to discuss about the menu are the shakes. They use a real ice cream base and it is delicious. I used to devour these as a kid but unfortunately no longer get to enjoy them. I doubt they are working on a dairy-free/vegan milkshake but boy if they did, I would be all over that. They have three flavors - vanilla, chocolate, and strawberry. All three are delicious separately but what In-N-Out can do is combine all three flavors in the same cup. It's called a Neapolitan Shake, named after the ice cream flavor. It is such a fantastic shake, the flavors stay somewhat separated with how they pour the shake into the cup so one sip through the straw can be vanilla then turn to chocolate then strawberry. It's awesome!

So that's the inside scoop on In-N-Out. Hopefully this has shed some light on why people don't believe the hype at first but why there is reason for the hype. If you ever find yourself near one (including Colorado now), be sure to give some of these hidden ordering secrets a try. It's what makes the place. And also be sure to really appreciate the total meal price. There is no other place where you can get that quality of fast food at that price.