My Chickens Are Finally Laying Eggs 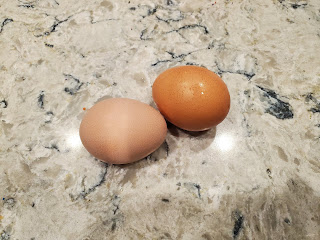 What a 2020 it was from a backyard chicken standpoint for me. I started the year with only one egg laying chicken, a 2-year old hen that was the last one surviving from a prior 4-bird flock.

I got three new chicks in late April and raised them indoors until they were big enough to go in the coop. Then the first of the three figured out a way out of the outdoor fence and my dog attacked and killed it. And then there were three.

Then a fox or coyote found the coop one night. At the time, I didn't have a way to completely close the coop but it was in a fenced in area. Well turns out that was not enough security. I posted about this experience where I found two of the three, one in my yard and one in my neighbor's yard. And then there were zero. No more backyard chicken eggs.

Then I got four new chicks in late July and raised them again indoors until they were ready to go into the coop. Then two got out somehow and once again my dog found and attacked them. And then there were two.

Then on Thanksgiving day, I went to check the coop and only found one inside. I searched all around the yard but found no evidence of the second one. Then I went out the next morning to look in the daylight and there it was right in one of my backyard pine trees. So there were still two.

Then the same chicken got out again but thankfully my wife was around and saw the whole thing. For the new flap door I built to secure the coop at night, I would prop it open so the door could become a ledge. Well this chicken figured that out and jumped onto it. Then it was high enough to jump over the fence. Now that we figured out how it kept getting out, it was easy to just pull the door all the way up to vertical.

Then on Christmas, I finally got my first egg from one of the chickens. And I got two other eggs from that one chicken over the following six days. Then on New Year's Day, I got an egg from the second chicken. It looked distinctly different from the first three eggs so that is how I know it must be from the other chicken.

It was quite an ordeal to get to this point but it sure is nice to have backyard eggs again. I'll chalk all this up to experience in making me an even better backyard chicken keeper. Hopefully, there are no new lessons for me to learn and these two chickens can produce as long as their bodies allow.