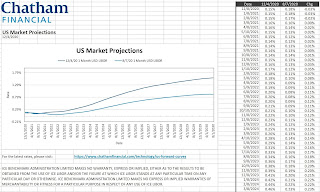 I had a post back in August that showed how forward interest rate curves can be helpful to follow to predict what might happen in financial markets. If it shows that rates will be lower in the future, then there could be issues in the market. If rates are predicted to go higher, than either the markets are improving or we could be getting inflation.

A lot has happened politically and economically since August so I figured it would be a good time to check back in on these forward interest rate curves to see what has changed.

In the chart above, I compare the forward curve from back in August (light blue) to the curve now in December, four months later (dark blue). As you can see, the curve has shifted materially. it is now predicting interest rates to increase faster and higher than four months ago. This may be for a variety of reasons. First, we have the presidential election now behind us with Joe Biden winning. Second, we have some really positive news on the potential for vaccinations for COVID-19.

Both of these events may be contributing to the market predicting a faster recovery. There may also be a prediction for faster inflation too since Democrats have already expressed a deep interest in running deficits to help families and businesses recover from COVID and also support environmental initiatives to combat global warming. This fiscal spending is likely to have a more inflationary impact that the monetary spending that the Fed has been doing over the last decade, which really only inflated financial assets.

The other interesting thing is what happens to rates in the near term. Back in August, the curve was predicting a low point in July of 2022. Now the low point is August 2021, nearly a full year earlier. This is telling me that the market is predicting that we might get COVID-19 behind us next year instead of it staying with us into 2022, but that we aren't out of the woods yet. We could still have choppy economic waters in the coming quarters since rates are predicted to go slightly lower between now and then. It's hard to believe because the U.S. market is hitting new all time highs right now, but I continue to recommend investing with caution in this environment.

I'll continue to check in on these forward curves periodically as I find them really interesting to follow and track changes.