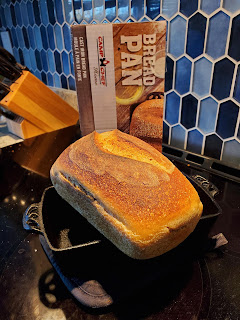 My Sourdough Loaf recipe is something I make every single week, and since I do, I've been on the search for the perfect loaf pan. I already had a glass loaf pan and a non-stick loaf pan. Both worked pretty well but the glass was prone to sticking and my non-stick wasn't technically made for 450 degree temperatures so I worried about the surface chemicals getting into the bread.

I found at Costco a Nordicware all-aluminum heavy duty loaf pan. You could see this thing being in the kitchen of a professional baker. I tried in on three back-to-back weeks, and the loaf would stick really badly. Each week I tried some different combination of oil, corn meal, and flour, but I could not figure out how to get the loaf to release. So I returned the pan and continued my search.

I got inspired one day after making a cast iron pizza and realizing how well the crust released from the cast iron. Since the pizza crust and the bread use almost identical ingredients, I figured a cast iron loaf pan might be what I need. Well, I went on a search for one and they were sold out everywhere. There must have been some COVID sourdough memo that I missed on using cast iron loaf pans.

Even on Amazon, the popular Lodge brand was sold out. I found another brand called Camp Chef. The pan was only $15.99 and thanks to some Bing search points, I had enough to get $15 in Amazon gift cards and get the pan for a couple bucks.

I've been using it now for 6 weeks and holy smokes, is it awesome. The loaf releases with no issues. I spread a teaspoon of canola or olive oil around in the entire interior surface of the pan each time before placing the dough inside, and that's it. The dough can rise inside the pan, then go right into the oven, then come out, and the bread slides right out every time. Plus it comes out so clean, the pan doesn't even need washing afterwards. Just right back into the cupboard after it cools ready for next week. How awesome is that!

The one thing I am trying to perfect though is that the top of the bread cooks faster than the sides and body. It does give it an almost burnt look on the top (but not a burnt flavor). I may try to find another larger pot that can go over the top during the first half of the bake to keep the top from burning. Foil might also work. If I find a solution, I'll let you know.

Meanwhile, since I bought my pan, it appears the panic buying of cast iron loaf pans continues. Amazon still has the Camp Chef loaf pan but it is now $27.85. That's a 74% increase in 6 weeks! That's insane!

I then checked out Camp Chef's direct website and they are selling the same item for only $18.00. This proves it pays to shop around and don't count on Amazon having the lowest price. This is the first time I've seen Amazon play this game before on pricing. Usually they are the lowest price or pretty close to the lowest. Clearly Amazon sees an opportunity to price gauge, but they better be careful as it could begin to erode trust in the brand.

Here is a link to the pan on Amazon.

Here is a link to the pan on Camp Chef's website.

Also note that some reviews mention some issues with quality. This is a rough cast iron, not the smooth Le Creuset kind. You will want to wash it with water when you get it to remove any factory chemicals or residue. You will then want to season it and treat it like any other cast iron. Also the Lodge cast iron appears to be a better, thicker quality so if you can find it, it may be worth paying up for it. I just couldn't find it myself and have been plenty satisfied so far with Camp Chef's quality.