My Experiments With Vegan Ice Cream 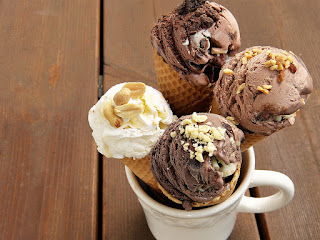 Ice Cream and Milkshakes are one of my top favorite foods. It really is a little slice of happiness for me when I eat and drink them. But in my early 30s, I began to realize that the after effects of these foods were not worth that happiness.

First, of course, were the calories and issues with maintaining my ideal weight. Second, I was beginning to link dairy (and particularly heavy cream dairy like butter and ice cream) to inflammation in my system. I would feel groggy and sluggish and my body would produce mucus that caused morning coughing and stuffy nose. I finally made the connection by eliminating dairy from my diet and realized how much that helped me feel better.

Fortunately, many other people for one reason or another are doing the same whether it be for allergy reasons, health reasons, or moral reasons. So that means more people are experimenting with ways to buy and make vegan alternatives. Vegan ice cream is now a lot easier to find in the grocery store and even the neighborhood ice cream shop.

I've been wanting to make my own vegan ice cream at home and have started to experiment with different recipes. For now, I am trying to nail down a basic plain vanilla flavor. When trying grocery store versions, I know that cashew milk and coconut milk are my favorites. So I wanted to start there.

I found three recipes from blogs that came up in Google searches:

Two weekends ago, I tried the Cinnamon & Coriander ice cream because it was simpler using all cashew milk as the base and I was in the coffee ice cream mood. First thing I learned was to properly prepare the cashew milk. You need to soak the cashews for 12-24 hours in advance and I forgot to do that. It said you can use hot water to shorten the soak time to a few hours but that did not work for me. My cashew milk was grainy.
Second thing I learned is cashew milk doesn't make the right ice cream base. It just didn't taste right to me and I would not make it again.
Last weekend, I tried a combination of the other two recipes. I was in the plain vanilla mood and I wanted to try the combination of cashew milk and coconut milk. This one ended up tasting better out of the blender. But then I tried the step in My Darling Vegan to add cornstarch and cook it to thicken it. Not only did this result in clumps from the corn starch (I should have been stirring with a whisk instead of a spoon) but it changed the flavor as well. The base definitely tasted better (and in fact was really good) before cooking it vs after cooking it.
So I might try what I did again using a combo of cashew milk and coconut milk but not cook it. I think the cornstarch does help during the freeze process to make it less icy and more scoopable. So I'll experiment with that as well.
Even if that ends up working, I'm still going to experiment with other varieties. First because cashews are expensive so I'd like to find a more affordable base. Second because coconut milk is loaded with saturated fat. Sure this is a natural, plant-based fat but it is still a lot of calories and fat that need to be consumed in moderation. And I don't know what moderation is when it comes to ice cream. Some ideas I have are frozen bananas and even thick rice milk or oat milk.
I'll keep you posted with my experiments and will be sure to post any recipes that I think are worthy of others trying.