I Got New Chicks 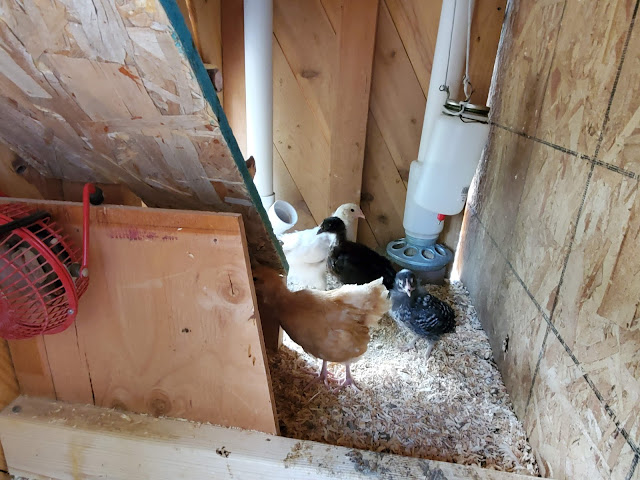 So I wrote about how I lost three chickens to a coyote at the end of June. I thought at the time that I would give it a rest for the season, but I couldn't help myself.

Summer is a perfect time to raise chicks because the outside temp is obviously warmer than spring so they can go outside to the coop sooner than if I raised them in the spring. And if I add five months from when I got them, I should be getting eggs right around New Years to keep a good source of protein going during the winter months.

I shored up the coop so a coyote can no longer get in. And I outfitted it with both a heat lamp and a mini fan since we are in the time of year in Denver where the days are too hot and the nights are a bit too cool.

I got two Barred Rocks (the black ones), one Plymouth Rock (the white one), and one Buff Orpington (the orange one). The Barred Rock chicks are technically one week younger than the other two because two of the four chicks I got in the first batch died within the first 48 hours from what seriously seemed to be COVID-19. They had issues breathing and would cough or sneeze until they finally laid down and passed. That was my first time losing a baby chick to a sickness so that was tough, but the feed store I got them from said gave me two new ones for free.

The chicks are now 4 and 5 weeks old and just moved into the coop. So now I have four chicks and I'll likely need to keep them inside the coop for another 2-3 weeks until they are large enough to be able to go in the chicken run without squeezing through the wire fence holes.

Hopefully all goes to plan from here on out, but one thing I've learned about backyard chickens is nothing goes to plan.