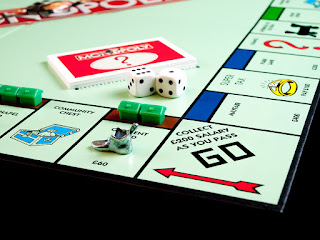 Remember being a kid and learning the board game Monopoly? You'd quickly learn that whoever had control of the properties would begin to stockpile cash and everyone who didn't have properties would eventually go broke.
Well, the exact same thing is happening in real life on a massive scale. America used to be a place where nearly everyone could start to acquire property and build a business. Now it is getting harder and harder to become one of the wealth accumulators.
Your paycheck no longer gives you enough to save. That money instead gets funneled to corporations which is then used to enrich the executives and the shareholders. And just when their greed is about to make them go bankrupt or go to jail, they get bailed out by politicians and the Fed to make sure they don't lose their money or livelihood. And the game continues.
This game is perpetuated in two ways. First the Fed keeps asset prices high. They do it by buying some of the board pieces themselves, but they buy those pieces from the rich. Now the rich have more cash to buy more board pieces. So the prices of any available board pieces increase. This crowds out more players from being able to buy board pieces themselves so the only people able to play are the rich.
The second way is to make sure the poor and middle class can still play the game. They want everyone to be able to pass Go and collect $200. They want everyone to have a paycheck or unemployment or soon Universal Basic Income. But with no ability to save that money and no property left to acquire at decent prices, they have no way to truly influence the game. Through necessity or desire, their paycheck will get spent and flow right back to the corporations and wealthy.
Need proof? Just look at the monetary and fiscal response to COVID-19. Businesses got decimated during the lock downs. Countless people lost their jobs. Yet the Fed and Congress ensured the wealthy and corporations didn't lose their board pieces and that the poor and middle class still got money to spend.
As a result, the stock market is acting like nothing happened because all that government spending and all that unemployment and bailout money will end up straight in the hands of corporations and the wealthy.
The only way to get control back is to stop playing the game. Stop having your money flow to corporations. This is nearly impossible to do in today's world so it will have to come in small steps. Find one thing in your life that you rely on a corporation for and figure out a different way.
Maybe you go vegan a day a week because that is less money going to big agriculture. Maybe you drive/travel less and walk/bike more because that is less money going to big energy. Maybe you put the cell phone away more often because that is less money going to big tech. Maybe you explore alternative ways to address a medical issue because that is less money going to big pharma. Maybe you find ways to buy local knowing your money will stay local.
The game is rigged and the only way to change it is to stop playing it.