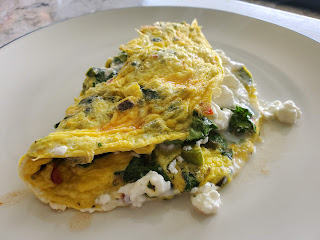 Those who know me know I can make a pretty mean omelet. It is both in the flavor but also the texture.
My goal is maximum fluffiness. I find most brunch places are after speed and don't take the time or steps needed to make a truly fluffy omelet.
Developing this technique all started with my mom who was a pretty good cook. I took an interest in learning how to cook breakfast and would always be in the kitchen with her on the weekends learning her tips and tricks for eggs, pancakes, waffles, and baked treats.
She taught me her trick to making super fluffy omelets, but her method did take some skill with the flipping action. I've adjusted her method slightly to make it even easier and more full proof by using the oven broiler. Here is the recipe and methods:

That's all there is to a perfectly fluffy omelet. The only issue you will find is that you'll like these omelets so much more that you'll begin to not like brunch place omelets anymore. You've been warned, but think of all the money you'll save from not eating brunch out!