How To Price Out A Recipe

One of the most valuable skills you can learn is how to accurately price out a recipe. This will instantly help you see what ingredients and meals are really costing you to be able make adjustments to save money. It will also help you see what ingredients are most valuable in the marketplace so you can consider growing those ingredients yourself (and maybe some extra to sell).
The trick to this exercise is understanding both the unit of measure for pricing and the unit of measure in the recipe and how to use math to bridge the gap.
Some of the big ingredients are easy. If a recipe calls for one pound of dried beans, and you can buy a pound of dried beans for $1.50 at the store, then you know the recipe has $1.50 worth of beans. If only every item was this simple.
Where it gets more complex is something like kosher salt. I typical 3 pound box of kosher salt sells for $2.99. So $2.99/3 equals $1.00 per pound (rounded for ease). But what if the recipe only calls for 1 teaspoon of salt? What is the cost of the salt in the recipe?
To do this, you need to determine how many teaspoons are in a pound. Thankfully this is where the internet is your friend. For something like kosher salt, you can get the answer right from "Hey Google" (she'll answer 75.60 tsp). So each teaspoons costs $1.00/75.60 = $0.0132. That's just a bit over one cent per teaspoon. Bet you never thought of that? A teaspoon of salt costs about one penny.
What if you had an ingredient that "Hey Google" didn't know the answer too? Well, for that, I recommend converting to grams because I guarantee you "Hey Google" knows the grams of just about everything. "Hey Google, how many grams are in a teaspoon of kosher salt?" Answer: "6.00 grams."
Then it's easy to convert grams to ounces. "Hey Google, how many ounces are in 1 gram?" Answer: "0.0353 ounces in one gram." So 1 teaspoon of kosher salt = 6 grams = 6*0.0353 ounces = 0.2118 ounces. And there are 16 ounces in a pound (you can ask Google for that one too). So 0.2118/16 = 0.0132375 pounds. At a cost of $1.00 per pound, it costs $0.0132375 per teaspoon of salt, which is the same result as above.
If a recipe calls for 1/2 teaspoon of salt, well that is $0.0132/2 = $0.0066. And two teaspoons costs $0.0264.
Thankfully liquid ingredients are a bit easier as most liquids way the standard 8 ounces per cup just like water. Let's use olive oil as an example. A bottle of olive oil might cost $6.00 for 16 ounces so that is equivalent to $0.375 per ounce ($6/16oz). If a recipe called for a quarter cup of olive oil, that is 2 ounces (8oz per cup divided by 4). So that means the olive oil in the recipe costs $0.375*2 = $0.75.
For tablespoons and teaspoons of liquids, that is a bit harder but not as hard as dry ingredients because you don't need to convert to grams since liquids typically weigh the same. You can't say the same about dry ingredients. Take salt and pepper as an example. A teaspoon of kosher salt weighs 6 grams but a teaspoon of black pepper weighs only 2.3 grams. But a teaspoon of olive oil weighs about the same as a teaspoon of vinegar since they are both liquid.
Because of this, it will be really helpful to commit to memory that there are 3 teaspoons in a tablespoon and 4 tablespoons in 1/4 cup. So how many teaspoons in one cup? Simple, 3*4*4 = 48 teaspoons in one 8 oz cup. This also means that each tablespoon of liquid weighs 0.5 ounces (8 ounces / 4 quarter cups / 4 tablespoons = 0.5 ounces per tablespoon). And each teaspoon weighs 0.167 ounces (0.5/3).
Now with this knowledge, it is really simple to convert tablespoons and teaspoons of liquid items into costs. If a recipe calls for a teaspoon of olive oil, the cost of that is $0.0625 (0.167 ounces in a teaspoon multiplied by the cost of $0.375 per ounce from above). If a recipe calls for a tablespoon of olive oil, that is just half an ounce which costs $0.1875.
Then if you follow these procedures for every one of the ingredients in a recipe, you'll be able to calculate the cost for the entire recipe. The last step is to divide the recipe by how many servings it makes to get a cost per serving.
Once you do this for a few recipes, you'll quickly begin to see three things: first how much cheaper it is to make things at home compared to buying them from a restaurant. Second, you'll see that some ingredients are a lot cheaper than others. Just from the examples above, you can compare that a teaspoon of kosher salt costs one cent but a teaspoon of olive oil costs 6 cents. Third, your brain will start to think strategically about how to source ingredients for cheaper.
You'll quickly know things in bulk. Take beans as an example and do the math yourself to see how much cheaper it is to by dried beans than canned beans. Note, one pound of dried beans makes the equivalent of 4 cans of cooked beans.
I hope you enjoy this exercise and were able to follow the math. Here is an example of an entire recipe costed out using my Vegan Chili recipe that you can use as a guide: 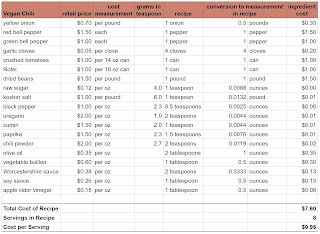