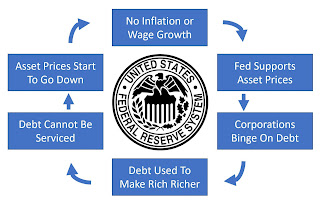 The Flywheel effect is a concept developed by the renowned author, Jim Collins. The idea is you have this giant, heavy wheel which at first is difficult to turn, but once it gains momentum, it becomes easier and easier and feeds on its own momentum to build even more momentum.
The Federal Reserve has developed its own flywheel that the financial markets absolutely are feeding on. At this point, there is likely no stopping it. Here is the detail behind it:
Those in control don't want to stop this flywheel because they are the ones directly benefiting from it. So the only way to stop this flywheel is (1) to see if the national debt and Fed money printing has a limit or (2) to remove ourselves from the Fed's game. Start voting with your dollars by first finding a way to not need as many dollars and second by supporting community and small businesses, not the mega corporations. I’d also say vote but it appears both major parties put corporate interests above all else so a vote for either of them is a vote for the status quo.